The previous owner was Brian Hussey who ran a private forestation business from the building in the late 1970’s and 1980’s.  The Auctioneers for the sale were J.P & M Doyle.  The purchase price was £55,000 and the Credit Union invested £40,000 to renovate it. Local Architect Manus O’Donnell worked with the Credit Union to restore and adapt the building to a Credit Union office and James Breen Limited carried out the renovations.  It was officially opened by the ILCU President in March 1988.

The Credit Union Logo was made by the late renowned Fergus O’Farrell of Tinode, Blessington, and was in place on the blind arch for the official opening of the building.  The name – Credit Union House – was added some years later (early 1990’s) and was made by local craftsman Kieran Cunningham (Ringfort Crafts) who operates out of one of the Units in the Enterprise Centre to the rear of Credit Union House. 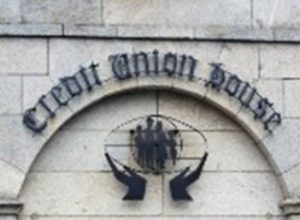 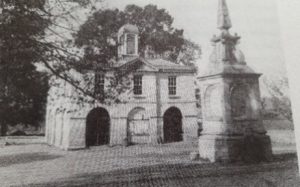 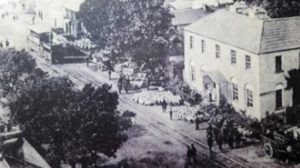 The building was originally built as a Market House around the 1820’s.  It retained its use as a Market House from the mid 1800’s to the mid 1900’s. It was used by local farmers to sell their grain, pigs, hens, turkeys, etc. The area outside the building was known as Market Square. The farming community would assemble with their animals on Fair Day to sell and buy stock.

The Courthouse was built at the request of the Third Marquis of Downshire at a cost of 800 pounds around the late 1820’s. It is believed that stones from the “Big House” (Downshire Demesne) which was burned down in 1798 were used in the foundations of this building.

The architect of the Courthouse is not known but is believed to be Thomas Duff of Newry.  Thomas Duff designed Edenderry Courthouse and the Cathedral in Newry.  Other references suggest that, as well as having a formidable reputation as an ecclesiastical architect, he was the designer of several public buildings including the old Museum Building in Belfast, Hilltown Market House, Newry Courthouse, Market Hill Courthouse and others.

The building is constructed of ashen (white) granite.  The quarry markings on some of the granite blocks would indicate that granite came from Ballyknockan Quarries.  There is a benchmark (height 691 feet above sea level at Dublin Bay) on the left hand side of the building.

There is a weighbridge to the front of the building that was used for weighing animals in their carts or creels.   The scales itself along with the weights remain inside the building..  Hanging from the ceiling in Credit Union House in the first of the semi-circles is one of the old scales for weighing hens, turkeys, ducks, corn, oats, etc. This fixture is dated 1847. 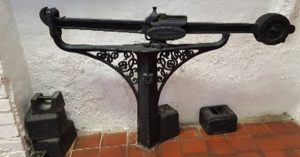 The ground floor comprises of a series of semi-circular arched openings. Windows openings are flat headed with seven timber sash windows. The parapet rests on a projecting cornice and all but obscures the hipped roof.  The roof is finished with natural slate. Chimney-stacks are rendered with corbeled caps and clay pots. The original roof was adorned with a cupola (rounded dome). The building is road fronted onto The Square.

To the centre of the south east front is a slightly advanced pediment bay displaying the Downshire Coat of Arms. 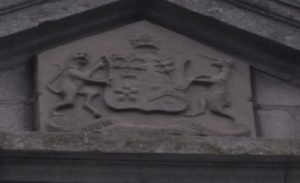